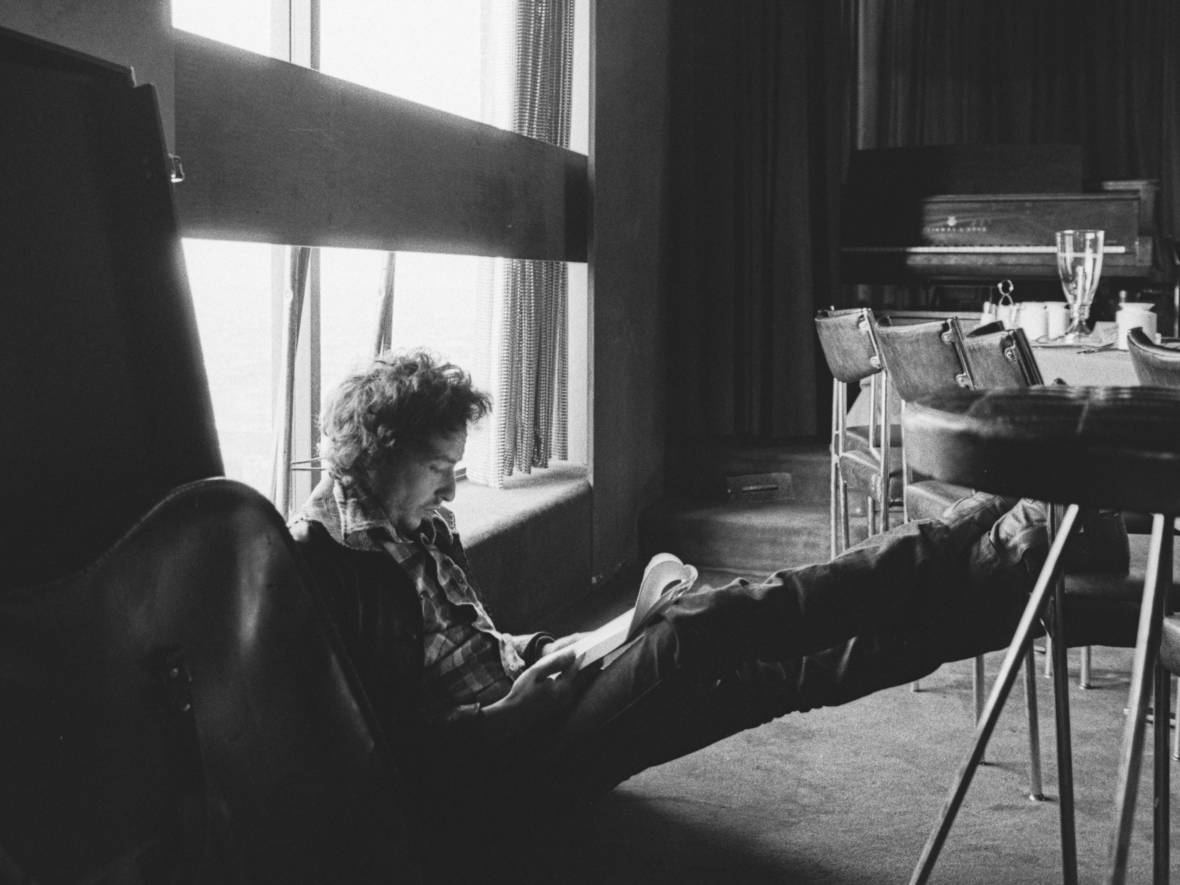 Don’t ask me nothin’ about nothin’

There must be some way out of here

I will bring someone to life in more ways than one

Don’t matter how long it takes, it’ll be done when it’s done

The man says, «Get out of here

I’ll tear you limb from limb»

I said, «You know, they refused Jesus, too»

And I’ve never gotten used to it

I’ve just learned to turn it off

Either I’m too sensitive

Or else I’m gettin’ soft

All you can do is do what you must

You do what you must do and you do it well

An’ the silent night will shatter

From the sounds inside my mind

As I’m one too many mornings

And a thousand miles behind

But lately I see her ribbons and her bows

Have fallen from her curls

Someone had to reach for the risin’ star, I guess it was up to me

What good am I if I know and don’t do?

As someone who has had you on his mind

A worried man with a worried mind

No one in front of me and nothing behind

The only thing I knew how to do

Was to keep on keeping on

Love is all there is, it makes the world go ’round,

Love and only love, it can’t be denied,

No matter what you think about it,

You just won’t be able to do without it,

Take a tip from one who’s tried

If I say I’m not loving you for what you are,

But for what you’re not

Once I had a pony, her name was Lucifer

Business is business, and it’s a murder most foul

Meantime life outside goes on all around you

Yonder stands your orphan with his gun

The rats have got your flour

Bad blood it got your mare

If there’s anyone that knows

Is there anyone that cares?

They’re selling postcards of the hanging

One day you’ll be in the ditch

Flies buzzin’ around your eyes

Blood on your saddle

Dreams never did work for me anyway,

Even when they did come true

All my powers of expression and thoughts so sublime

Could never do you justice in reason or rhyme

I’m glad I fought, I only wish we’d won

It’s not dark yet, but it’s getting there

The kingdoms of Experience

In the precious wind they rot

Each one wishing for what the other has got

The pump don’t work ‘cause the vandals took the handles

So when you see your neighbor carryin’ somethin’

Help him with his load

For that home across the road

But then, now again, not too many can be like you, fortunately

You used to laugh about

Everybody that was hanging out

Now you don’t talk so loud

Now you don’t seem so proud

About having to be scrounging for your next meal

Every step of the way we walk the line

Your days are numbered, so are mine

Do you want to make a deal?

Every man’s conscience is vile and depraved

You cannot depend on it to be your guide

When it’s you who must keep it satisfied

Yes, I wish that for just one time

You could stand inside my shoes

You’d know what a drag it is to see you

Statues made of matchsticks crumble into one another

There’s too many people, too many to recall

I thought some of them were friends of mine, I was wrong about them all

If love is a sin then beauty is a crime

I ain’t sayin’ you treated me unkind

You could have done better but I don’t mind

This is how I spend my days

I came to bury not to praise

I pay in blood, but not my own

Coffins droppin’ in the street

You can always come back, but you can’t come back all the way

You just sit around and ask for ashtrays, can’t you reach?

Ahh princess on a steeple and all the pretty people

They’re all drinking, thinking that they’ve got it made

But everybody still talks about how badly they were shocked

But me, I expected it to happen, I knew he’d lost control

Well, my sense of humanity has gone down the drain

Behind every beautiful thing there’s been some kind of pain

I can’t help it if I’m lucky

Who carried the dishes and took out the garbage

And never sat once at the head of the table

And didn’t even talk to the people at the table

Who just cleaned up all the food from the table

Today and tomorrow, and yesterday, too

She was born in spring, but I was born too late

She says, “You can’t repeat the past.”

you can’t? Of course you can.”

They say prayer has the power to help

So pray for me mother

In the human heart an evil spirit can dwell

I’m ready to go anywhere, I’m ready for to fade

Into my own parade, cast your dancing spell my way

I promise to go under it

And if my thought-dreams could be seen

They’d probably put my head in a guillotine

And somebody else says, “Where what is?”

Am I here all alone?”

God say, “You can do what you want Abe, but

The next time you see me comin’ you better run”

I met a young woman whose body was burning

I met a young girl, she gave me a rainbow

I met one man who was wounded in love

I met another man who was wounded with hatred

I would’ve gone on after you

My weariness amazes me, I’m branded on my feet

I have no one to meet

And the ancient empty street’s too dead for dreaming

I will follow your casket in the pale afternoon

The ghost of ’lectricity howls in the bones of her face

It’s easy to see without looking too far

That not much is really sacred

Well, I try my best to be just like I am

But everybody wants you to be just like them

They sing while you slave and I just get bored

On a South Dakota farm

On a South Dakota farm

Somewhere in the distance

I saw a white ladder all covered with water

Please her, please him, buy gifts

And they put you on the day shift

Idiot wind, blowing every time you move your teeth

It’s a wonder that you still know how to breathe

He not busy being born is busy dying

I think Abraham Lincoln said that

Far from the twisted reach of crazy sorrow

While money doesn’t talk, it swears

Propaganda, all is phony

And I’ll stand on the ocean until I start sinking